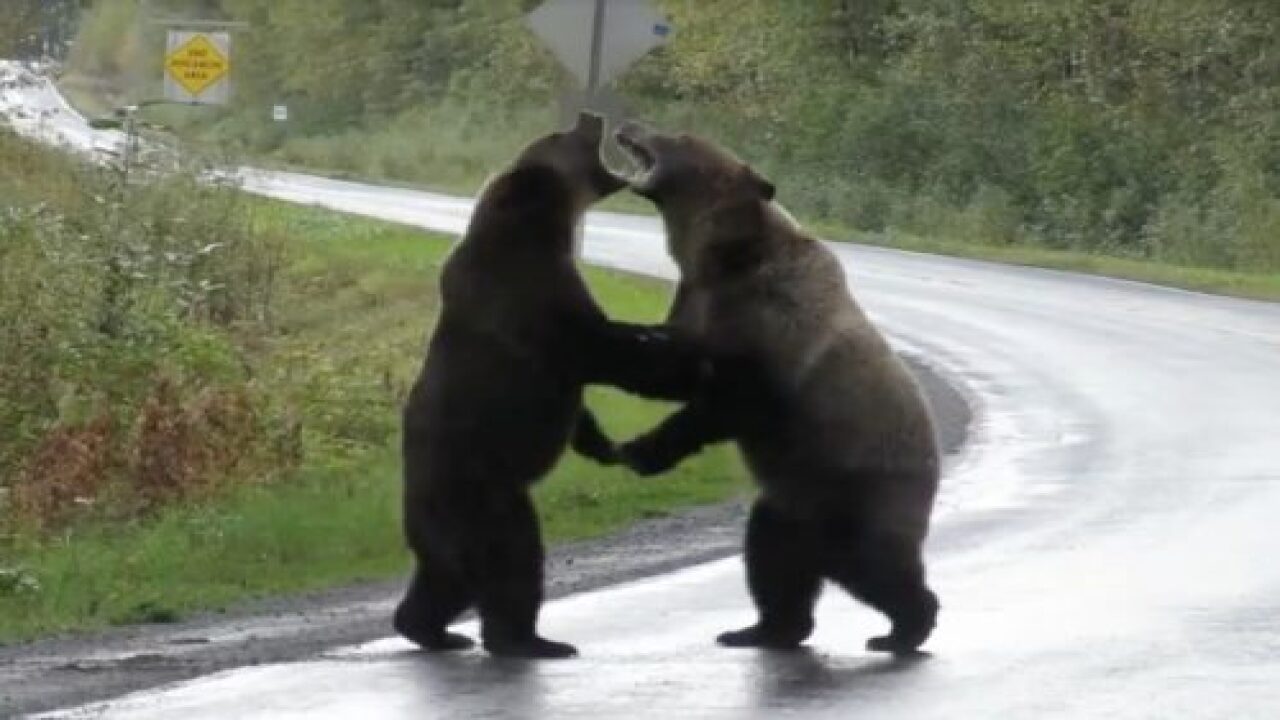 A traveler in Canada spotted an incredible wildlife encounter — two grizzly bears locked in battle — and she got it on video!

Cari McGillivray captured the footage outside of Stewart, British Columbia, a town near Canada’s border with Alaska. In it, the two large creatures stand on the edge of a rural highway, making lowing sounds into each other’s faces. The situation escalates quickly, though, and the two animals go full beast mode, standing on their hind legs in the middle of the deserted road, baring teeth and swiping at each other with massive claws.

These are definitely not cute, little, tumbly teddy bears. These two are mad.

The clash continues as the bears wrestle to the ground and then roll down an embankment. It seems like they might just go down the hill, but nope — they scramble back onto the highway and then lope toward the camera!

At this point, the camera clatters a bit and viewers catch a hint that McGillivray was filming the fight from inside a car. Her camerawork is so steady it almost seems like she’s standing right there.

Check the video out for yourself:

McGillivray posted to Facebook on Sept. 20; less than a week later the video had been viewed more than 4 million times! (I only watched it like 100 times, though.)

Oh, and it case you missed it the first time, McGillivray’s post pointed out an additional spectator in the background of the melee: “Keep a sharp eye out for the little wolf that is observing them in the distance!” she wrote. The wolf appears with about 13 seconds left on the video — it looks a bit like a person stumbling across a bar fight that’s spilled into the street.

Grizzly bears are not typically sociable animals, according to the National Wildlife Federation. Males live solitary lives after they separate from their mothers, and compete ferociously for mates.

Right now, bears are trying to eat all they can for the winter months ahead, though. Maybe these guys were fighting over a cheeseburger? (Just kidding.) We’re lucky to see this rare footage of the wild happenings up north!