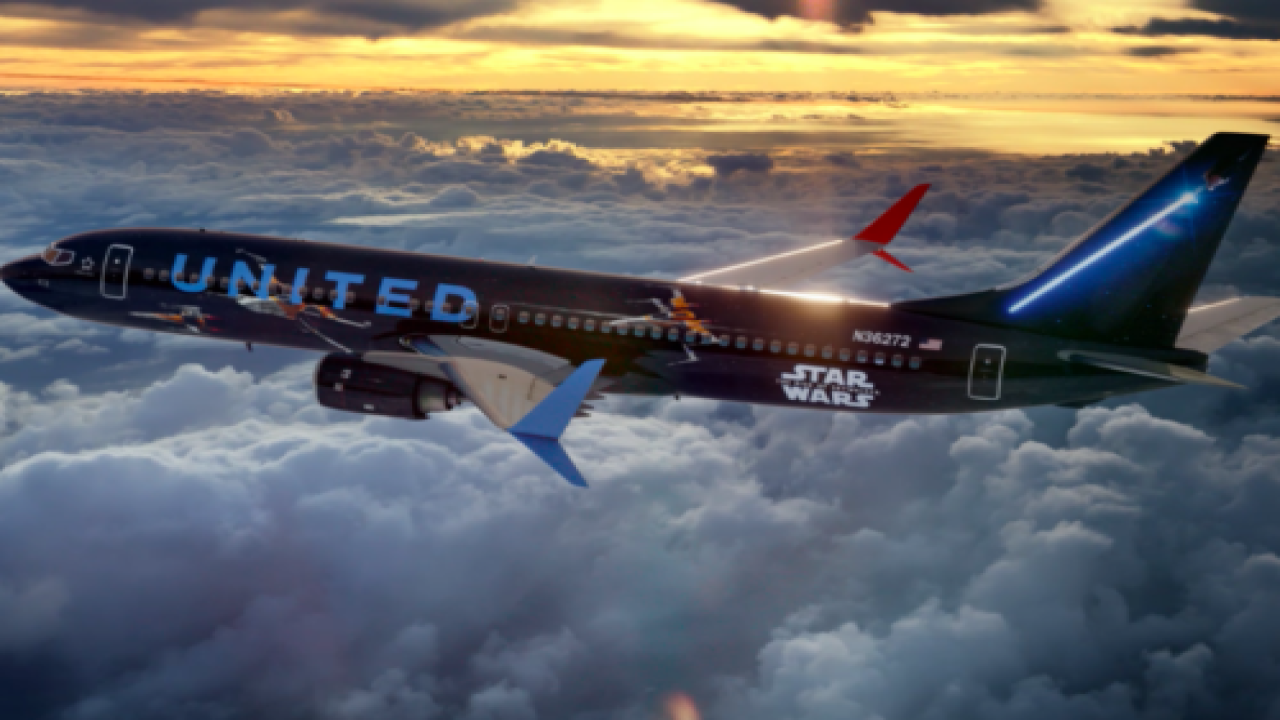 United Airlines is joining the “Star Wars” universe to celebrate the release of the next film in a unique way: A United 737-800 that’s been outfitted in “Star Wars” regalia, from the fuselage to the flight tracker.

Scheduled to depart in November , the aircraft’s exterior is painted black with the “Star Wars” logo featured prominently, plus renderings of X-wing fighters and other starships from the movies . One side of the plane represents the Jedi, with a blue lightsaber on the tail fin, while the other side sports the red lightsaber of the evil First Order.

Lucky passengers board the plane with the music of “Star Wars” trumpeting over the speakers.  Jedi and First Order insignia decorate the seats’ headrests — you’ll know which side of the conflict you’re on based on your seat assignment. And in case anyone’s confused, a plaque at the front of the aircraft announces the airline’s partnership with “Star Wars: The Rise of Skywalker.”

The “ Star Wars ” geekery doesn’t end there. Travelers receive an amenity kit with tissues, a toothbrush and ear plugs, plus skincare products by Sunday Riley (this last bit is what excites me the most). If they fly in December, they’ll also get a commemorative pin to show off when they brag about their trip. Additionally, MileagePlus members get opportunities to bid award miles on “Star Wars” experiences.

Even the pre-takeoff safety demonstration video goes full Force. It shows “Star Wars” events around the world while explaining the usual safety procedures — and then, at the end, C-3PO pops up to say, “Do have a pleasant flight, and may the Force be with you.”

According to Travel + Leisure , the souped-up Boeing will service destinations in the United States, Canada, Central America and the Caribbean. If you don’t plan to fly the friendly skies anytime soon, you can still catch a glimpse of the promotional plane on flight-tracking website FlightAware : When you enter the aircraft’s tail number (N36272, according to the photo), the plane’s location is marked with an X-wing fighter. (I’m an avgeek so this is cool to me.)

United’s 737 joins the recently-revealed LATAM Airlines “Stormtrooper plane,” a Boeing 777 that celebrates the “Star Wars: Galaxy’s Edge” exhibit at Disney World and lets passengers enjoy all 10 franchise films on the onboard entertainment system. This plane flies from São Paulo to places like Orlando, Miami, Madrid, Frankfurt, Paris and London. It took to the skies earlier this month .

It’s not quite the same as blasting through the stars in a TIE fighter. But this plane is a sci-fi dream come true for “Star Wars” superfans!