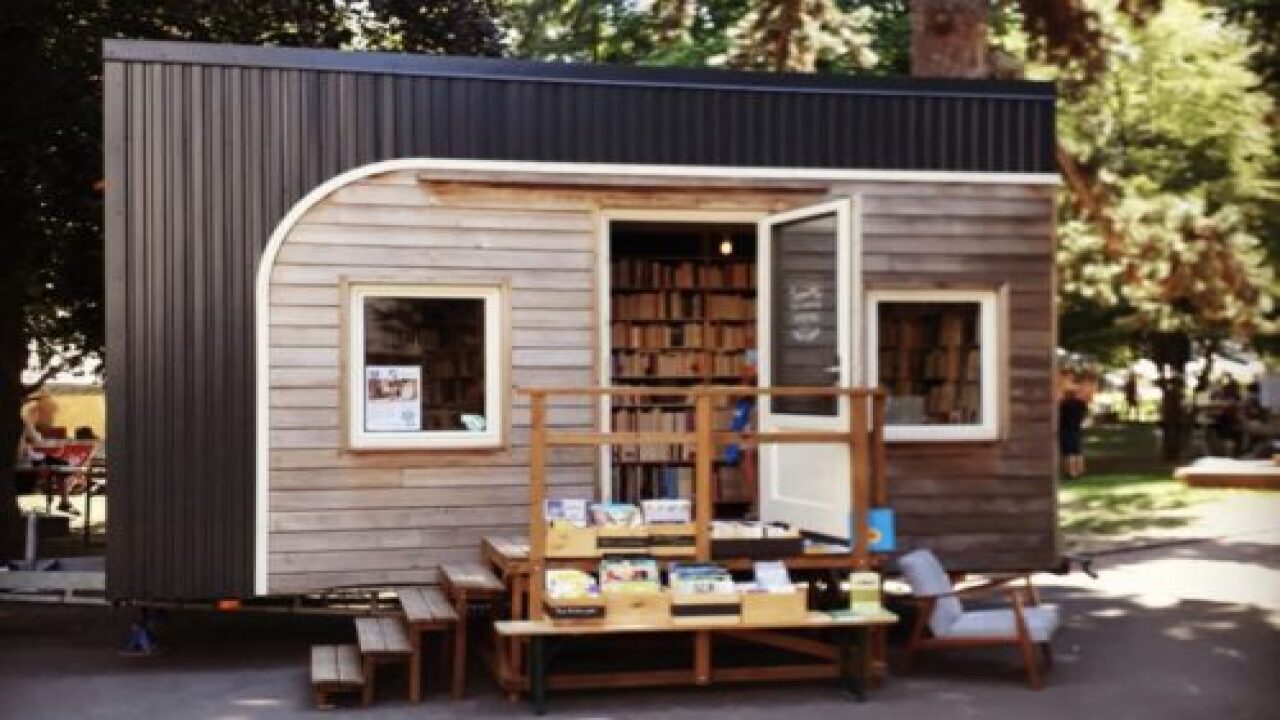 The bookmobile’s arrival at my elementary school always made me tingle in anticipation. What new books would it bring? The idea of piling colorful, mysterious (what new tales are on these pages?!?) books into my arms made me fidget in my second-grade seat until it was finally time to line up and descend the stairs to the bookmobile in the back parking lot. Then, once ensconced in the books lining the trailer’s walls, there was never enough time to browse adequately before our class was shuffled out the door.

I suspect Jean-Jacques Megel-Nuber — who bought a tiny home, loaded it with secondhand books and now drives it around to small villages, many of which have lost their only bookstores — would have been a kindred spirit in my second-grade classroom. Somehow I know he would have been my partner in willfully ignoring the teacher trying to hurry us out the bookmobile’s door.

Megel-Nuber, who lives in France, quit his job as an artistic director in 2015 and hired tiny-home maker La Maison Qui Chemine (which means “the wandering house”) to create a portable library he could live out of as he drove it around Alsace, the region of eastern France he calls home.

Megel-Nuber’s idea was to bring books to small villages in and near Alsace in order to make books both accessible and affordable. He calls the tiny bookstore Au Vrai Chic Littérère , and he pulls it to just about any festival or event or park he’s invited to in the region.

He settled on a tiny home for this venture in part to draw folks in — everyone likes to peek into tiny homes to see how the owner is pulling off living in very small spaces.

“I needed a place that makes people want to enter,” he told Fortune .

Here’s Megel-Nuber posing for a portrait in the Chic Littérère.

Don’t be fooled by the fish-eye lens, though. This is a tiny home, after all.

And by the way, this tiny home-turned-library is gorgeous on the inside. The light-colored pine throughout, including the bookshelves, gives it a bright interior.

“I wanted a little feeling of a cabin and an aura of a small bookstore, which both evoke a lot of dreaming,” Pauline Fagué, a designer at Maison qui Chemine, told Architectural Digest of the design.

It does look cozy.

Custom flaps cover the bookshelves to hold the books in place as Megel-Nuber drives the bookstore along winding roads in the hilly countryside of Alsace. You can see them in this post from the home’s maker.

A post shared by LaMaisonquiChemine Tiny Houses (@lamaisonquichemine) on Feb 3, 2017 at 10:27am PST

The home is designed to hold 3,000 books — about 1,300 pounds of literature. But it still has to be portable on those country roads. You can see from this photo that it’s quite narrow.

Au Vrai Chic Littérère seems to cater to all. But earlier this year, in February and March, Megel-Nuber moved 2,500 books for adults out of the store and temporarily transformed it into a children’s bookstore.

A post shared by LaMaisonquiChemine Tiny Houses (@lamaisonquichemine) on Oct 10, 2017 at 1:34am PDT

Above the bookstore, which is on the tiny home’s main level, is a small sleeping loft, where Megel-Nuber tucks in for the night wherever the bookstore ends up.

A post shared by LaMaisonquiChemine Tiny Houses (@lamaisonquichemine) on Dec 17, 2016 at 12:12pm PST

Since my teacher always had to usher me out of the bookmobile, and since I still have a serious problem with lingering too long (and buying too much) in any bookstore I enter, I understand why he’d want to forgo a hotel room and stay the night.

It seems I’m not the only one who can’t dislodge myself from bookstores and libraries.

“I am often told that it is difficult to leave [the bookstore] and that they’d like to have the same thing in their own garden,” Megel-Nuber told Fortune.

Au Vrai Chic Littérère is truly the stuff of dreams.