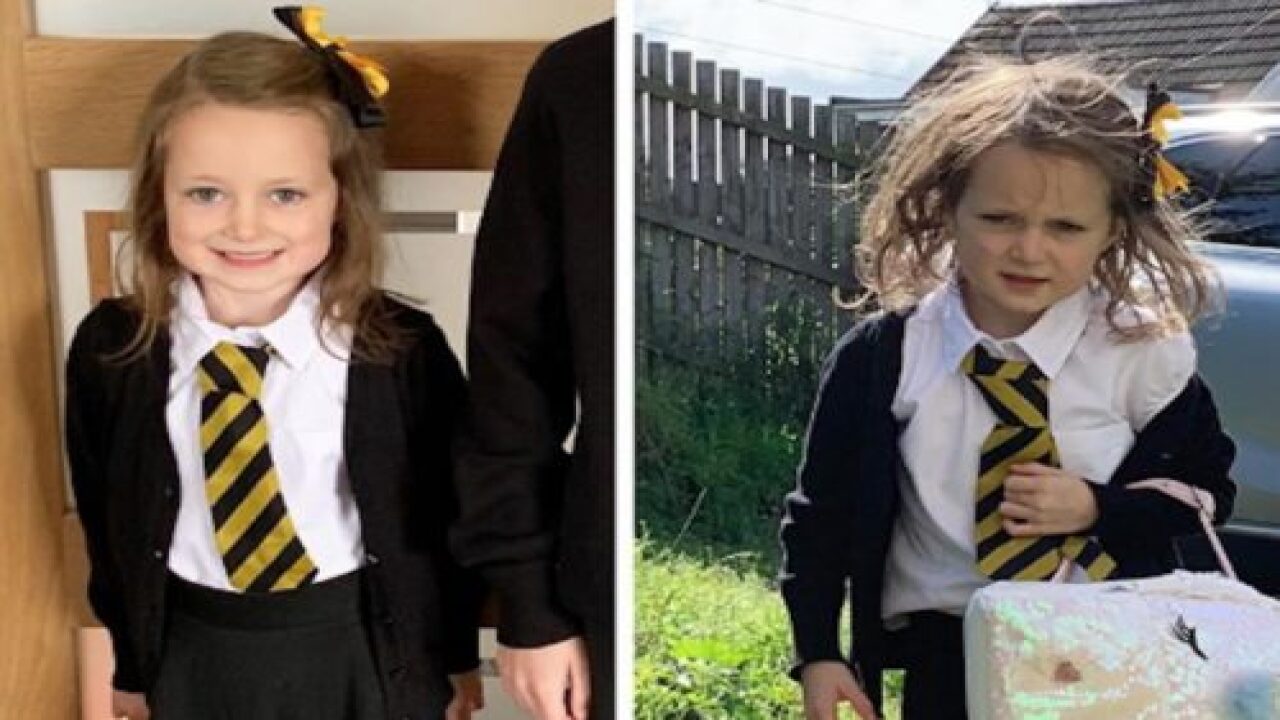 The first day of school can be a trying one — for parents, for teachers, for students. Lucie, a 5-year-old from Scotland, was certainly feeling the effects of that back to school transition, and there’s photographic evidence that managed to sums up perfectly everyone feels after that draining first day.

Lucie’s mom, Jillian Falconer, shared an image that showed what Lucie looked like heading off to school compared to how she looked at the end of the day, and the before and after images are absolutely hilarious. The first image shows a bright-eyed Lucie all ready for school. Her hair is perfectly combed, with her bow positioned just so. Her outfit is perfect, not a wrinkle in sight. And last, but certainly not least, her socks are pulled to just the right height.

By the end of the school day, however, it’s clear that a long day of playing and learning has taken its toll on little Lucie. Her hair is frazzled, her shirt is wrinkled and her tie is hanging to the side. Her socks and bow have fallen. But, not to worry, Lucie — we’ve all been there before.

The before and after photos were shared on a local news station’s Facebook page and have since gone viral, amassing thousands of shares and likes:

Falconer told the news outlet that she and Lucie’s dad “can’t believe [the photo] has gone viral.”

According to the mom, she was also shocked to see Lucie’s appearance at the end of the day.

“Lucie is just like any typical child,” she told Barrhead News. “When I went to pick her up from school and saw how she looked, I was mortified. I asked her what she had been doing at school and she said ‘Oh nothing, I just played with my friends.’”

Between her friends and her teachers, Lucie had obviously had a day chock full of exhausting fun.

“The wonders of primary two!” said mom to PopSugar. “The teachers are really good, they do a lot of active learning and things with them — so I take it it was down to that. She’d obviously had a really fun day.”

This isn’t the first time a photo from before and after a long day of school has gone viral. It turns out that mom Markeisha Simien can relate. She had her daughter’s hair done in a special style for the first day of kindergarten but, unfortunately, the new ‘do didn’t last long.

“I had my daughter’s hair done Sunday evening for school that week,” the girl’s mother, Simien told Yahoo Beauty. “When she got out of school Monday evening, her hair was tore up. The style didn’t even last 24 hours.”

An image from Twitter shows what the little girl’s hair looked like at the end of what was inevitably a “rough day.”

This Little Girl's Before And After School Hairdo Is Going Viral

Anyone else hardly recognize their kid after their first day of school? Not to worry — it just means they’re in for a lot of fun this year!