These DIY Sunflower Skulls Are The Ultimate Halloween Decoration 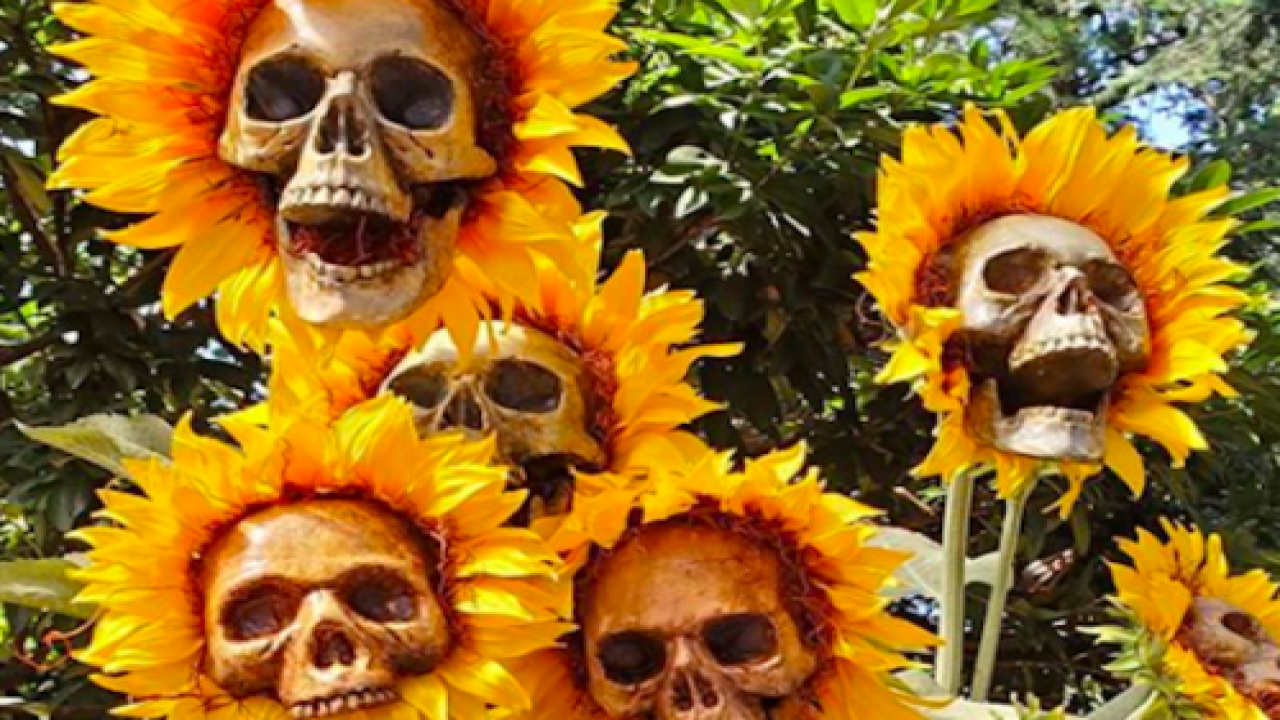 If you’ve got some extra time this spooky season, these crafty sunflower skulls are a Halloween dream — er, nightmare — come true.

Designed by Oregon artist Beejay Oslon, the cute-yet-creepy decorations are part of Oslon’s family Halloween display. Oslon painstakingly pieced together the blooms with easy-to-find craft materials to create a full scene, but the skull-flowers are mighty spooky all on their own.

“In all, the flowers pictured cost about $100 to make, but that’s largely because the large sunflowers themselves were $15 a pop, which was already half off,” Oslon told Popsugar. “You could easily do this at a smaller scale for a few bucks worth of dollar store finds.”

Oslon tracked the progress of his Halloween display on Instagram. Here’s a pic of the completed flowers before they joined the rest of the decor:

The flowers play an important role in the scene: a flowerbed being watered by a skeleton gardener. In Oslon’s next pic, they’re placed along with a bucket of blooming eyeballs.

The scene is (mostly) complete in the pic below, with more eyeball blossoms, a set of smaller skull-flowers and even a skeletal yard flamingo:

Little touches are important, though. The skulls are delicately framed with fake moss, and Oslon added some faux spiderwebs to the flowers, “upping the creep factor,” as he noted in a post.

As of a few days ago, the grim garden scene appeared to be finished. A massive spider creeps near the skeleton gardener, apparently the source of all those webs.

I wrapped up the main spider webbing on the scene today. Like everything it took way longer than anticipated but I get to cross something off the list. #halloween #halloweendiy #diy #diyhalloween #spooky #garden #skeleton #skullflowers #halloweendecorations #halloweendecor #trentonmills #spider #spiderman #spiderweb #instaart #instaartist

I think I’ve seen one like that in my yard before.

Oslon actually made a mold and poured his own skull shapes, which he said “took a bunch of research and way more time than I had intended to spend on this.” Hence, he advises patience for folks trying to make their own skull-flowers.

“Collect a variety of skulls and flowers and see which will fit well together,” he said on Popsugar. “Take your time with the prep work.”

Want more specific instructions? Oslon shared a tutorial on how to make these decorations with the blog Crafty Morning, which includes where he found his materials and what tools he used. If you’re looking to make your own, start here.

All right, creepy peeps! Time to get crafty.