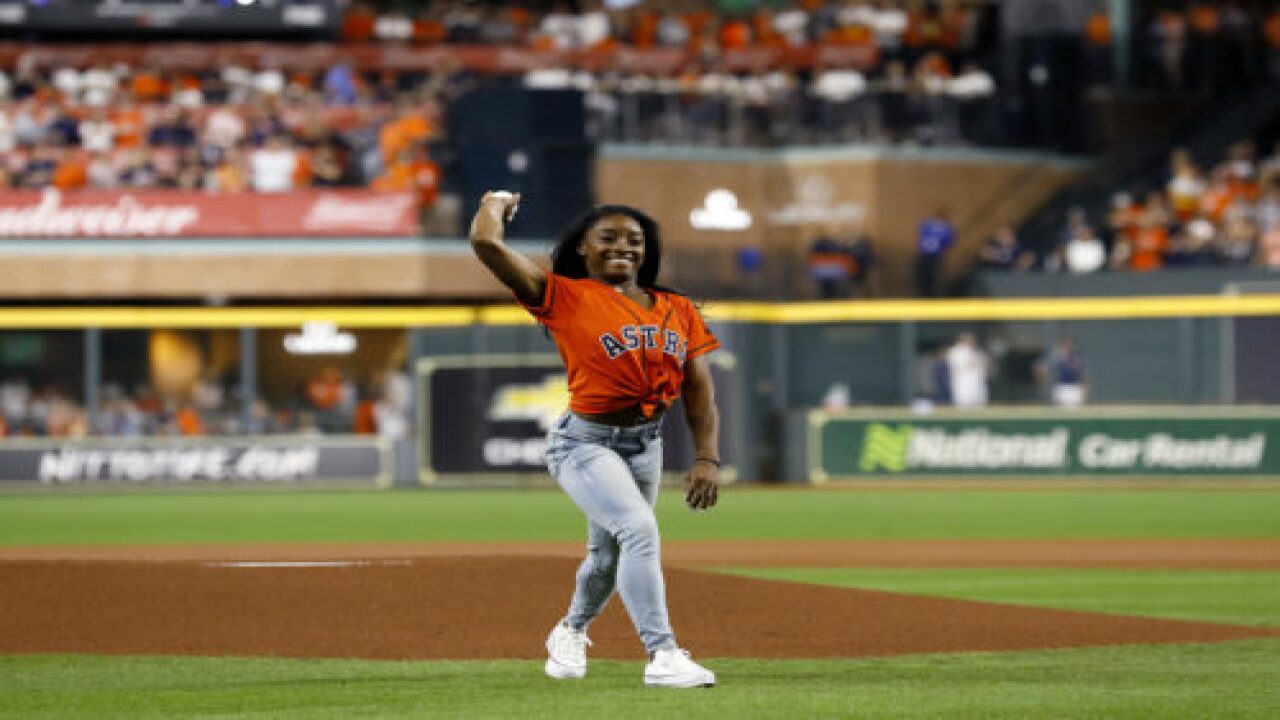 Gymnast Simone Biles has flipped her way into America’s hearts and blown our minds again! The four-time Olympic gold medalist and 24-time world champion title holder stopped by game two of the 2019 World Series in her hometown of Houston to throw out the ceremonial first pitch — but she added a little extra finesse.

Biles is fresh off her latest record-breaking performance at the Artistic Gymnastics World Championships in Germany, where she successfully performed two new signature moves on the floor exercise and balance beam.

Biles seemed excited to be at Minute Maid Field to throw out the first pitch to Houston Astros’ outfielder Jake Marisnick. In fact, you could say she was head-over-heels with emotions at that moment. In true championship form, Biles started out her pitch with a jaw-dropping standing backflip with a full twist. It really needs to be seen to be believed!

After that flipping amazing pitch, Biles made sure to stop and get an autograph from Marisnick. Even world champion athletes can still just be fans! It was a fabulous moment to see Biles so excited to get a memento of the occasion — although Marisnick should’ve gotten an autograph of his own after that performance.

Team USA, the official United States Olympic and Paralympic Committee, gave a social media shout-out on behalf of the reigning gymnastics champion and posed a question to the Gymnastics Code of Points, the rules governing body of women’s artistic gymnastics, about adding another new move to Biles’ growing collection.

When does this become the 'Biles' on the pitcher's mound? @Simone_Biles x #WorldSeries pic.twitter.com/IK5f1R19b7

This was not Biles’ first time stepping onto the field to deliver the first pitch at an Astros game. On July 4, 2016, she gave fans a sneak peek of her acrobatic skills she’d use in that summer’s Olympics with a side aerial move before her pitch.

. @Simone_Biles mother, Nellie, tells me move her daughter did prior to throwing out 1st pitch is called "side ariel" pic.twitter.com/95ihx06ARX

Simply amazing! Who else is already looking forward to watching the 2020 Summer Olympics on TV ?