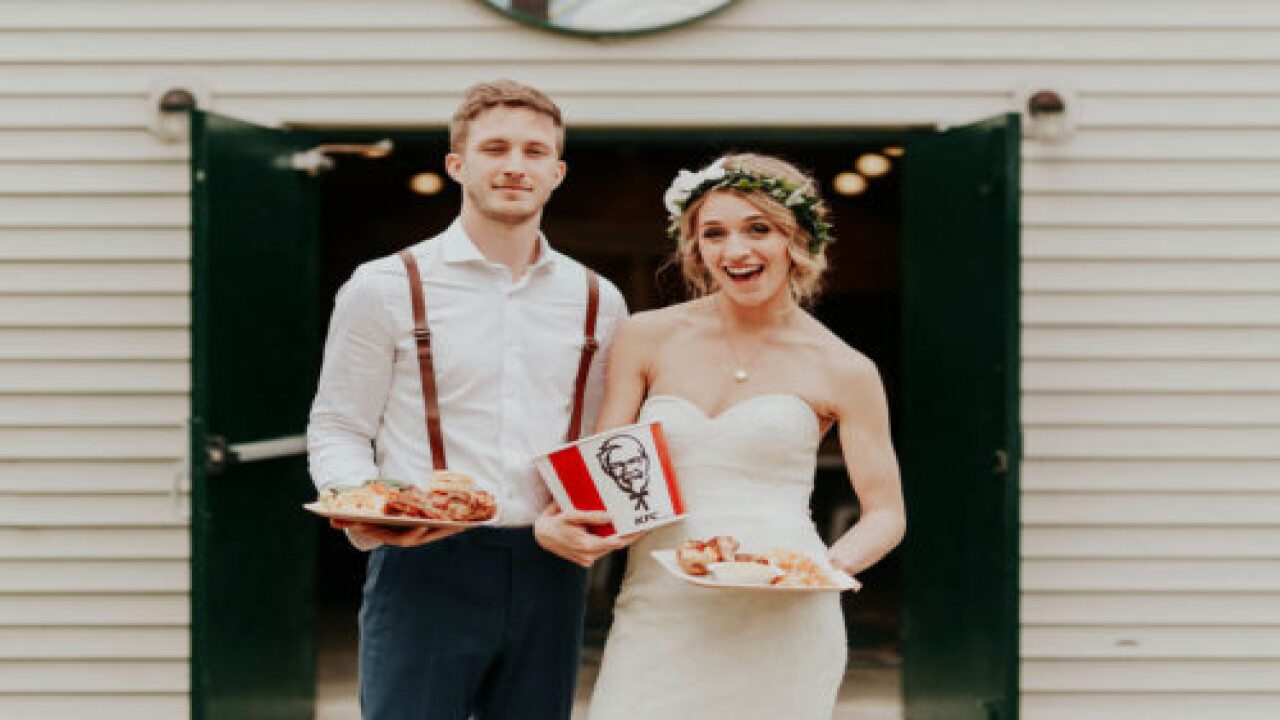 Ever eat a particularly delicious piece of fried chicken and think to yourself, “I would marry this!”?

Well, KFC isn’t offering up marriage licenses for its chicken just yet, but it is giving away free weddings to six clucky, I mean, lucky, engaged couples.

Intrigued? To enter, couples must live in Australia, be over 18 and plan to get married in Australia between Nov. 1, 2019 and May 31, 2020. To win one of six free KFC Weddings packages worth up to $35,000, entrants must simply fill out an online form.

Check out KFC’s promotional video below in which the company declares, “We’ve noticed it’s not just each other you’re declaring your love for… Introducing KFC Weddings. Uniting your love for KFC and each other.”

KFC will provide food and non-alcoholic beverages for up to 200 guests served from a KFC food truck. The package also includes custom KFC buckets, a photo booth, decorations, a KFC-themed celebrant (Colonel Sanders in the house?) and entertainment (we are assuming “The Chicken Dance” will be on the playlist).

Couples are responsible for all other costs like the venue, invites, bridal party attire and alcohol.

Australian KFC lovers, apply by the end of Oct. 18 with your 200-word statement on why you should win! KFC says it’ll judge entries based on “their originality, creative merit and independent expression.”

Make sure you and your partner have Instagram accounts set to public, as well! View all terms and conditions here.

As to why KFC decided to run this promotion, a good indicator might be the fact that Australians are big fans of the chicken chain. Market research company Roy Morgan released survey results in 2018 that showed KFC was the second most popular fast-food chain in the country, behind McDonald’s (known down under as Maccas). In a six-month time period, 40.8% of Australians surveyed had eaten there.

And Australians aren’t the only ones who love the chain! KFC is also very popular in other countries, including China, where it dominates the fast-food market.

This isn’t even KFC’s only foray into the game of love! There’s actually a video game called “I Love You, Colonel Sanders: A Finger-Lickin’ Good Dating Simulator,” that’s now available on PCs and Macs. And yes, the idea is to seduce KFC’s iconic creator/mascot, whose appearance has been changed a bit.

So if you’re an Aussie KFC fan couple willing to offer “one another a Wing, as a delicious symbol of everlasting love … before you’re officially declared the perfect combo,” as KFC says on its wedding vows-style application, you’ll want to put a KFC-themed wedding on your bucket list.