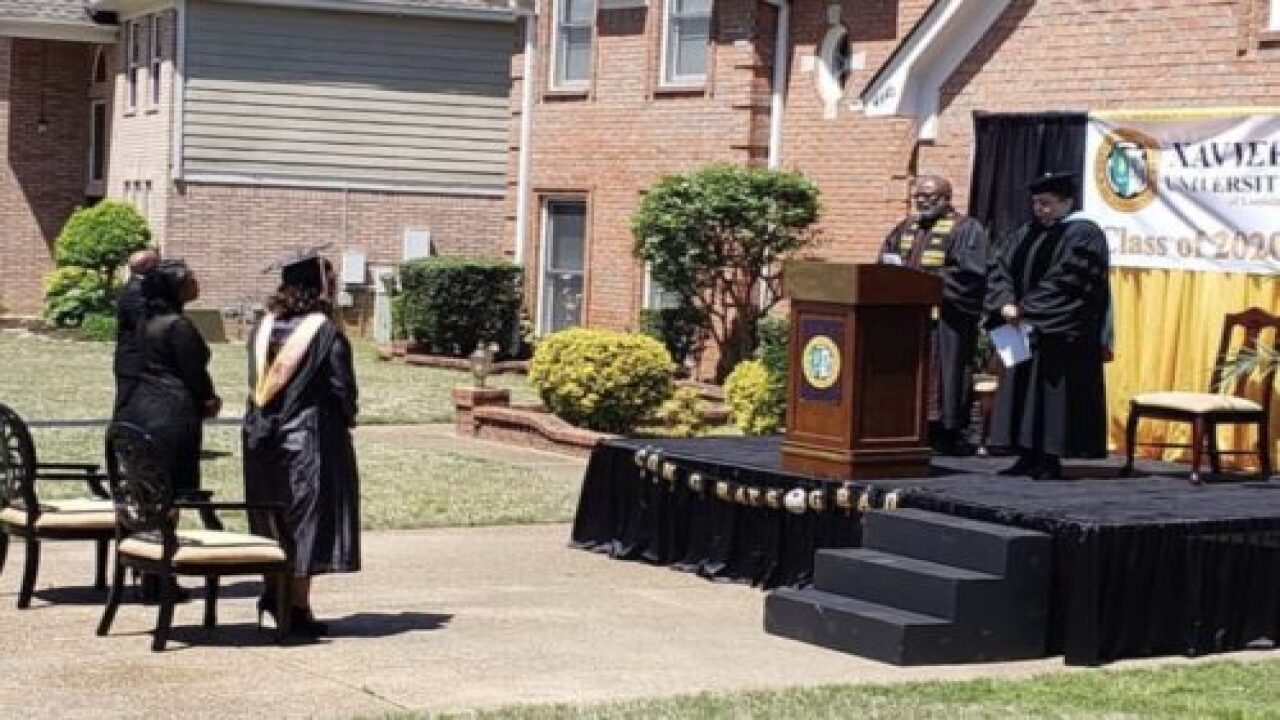 High school graduation looks a little different for the class of 2020 due to the coronavirus pandemic. Although official commencement ceremonies as we usually know them are canceled all over the country, people are still finding creative ways to make sure graduates feel recognized for their achievements.

One dad in Memphis, Tennessee, went so far as to build a stage in his driveway so that his daughter, Gabrielle Pierce, who earned her bachelor’s degree from Xavier University in New Orleans, could still get an approximation of a proper graduation ceremony at her own home.

When Torrence Burson noticed Pierce crying over having to miss out on her college graduation ceremony, he took matters into his own hands to make sure she felt special.

Once graduation day arrived, Pierce was able to walk across an actual stage, complete with a loudspeaker playing “Pomp and Circumstance.” Neighbors came by to watch her walk across the stage form a distance, and others drove by to cheer her on as well.

A neighbor, @negasibear86, shared the setup in an image posted to Instagram, writing, “My next door neighbor’s daughter couldn’t have her official graduation due to the pandemic so he created one for her! Now that’s a great/proud father for you. He made it happen!”

My next door neighbors daughter couldn't have her official graduation due to the pandemic so he created one for her! Now that's a great/proud father for you. He made it happen!

“We love our daughter this much,” Burson told Fox 13 Memphis on his motivation behind creating the elaborate scheme. “If I had to do this over again, I’d probably do it even bigger.”

What an amazing dad!

For her part, Pierce was overwhelmed with gratitude for her dad’s over-the-top gesture.

“I was just in awe,” the new graduate told Fox 13. “I was amazed. I couldn’t believe a lot of people showed up. People were driving by yelling congratulations.”

Check out the whole awesome at-home graduation ceremony in this video posted to Facebook by Pierce’s brother Torrence Burson, who noted that their dad “went all out” for his little sister’s graduation.

“It was just amazing,” Pierce told Fox 13. “Better than the actual graduation, because it was more personal.”

According to Blavity, the programs made for the event (they had programs made, too!) indicated that Pierce earned her degree in public health science for epidemiology, plans to join the Armed Forces and eventually hopes to work for the Centers for Disease Control.

Congratulations to Pierce and kudos to her dad for going the extra mile to make his daughter feel special!