Cinnamon Coke And Spiced Cranberry Sprite Are Coming This Fall 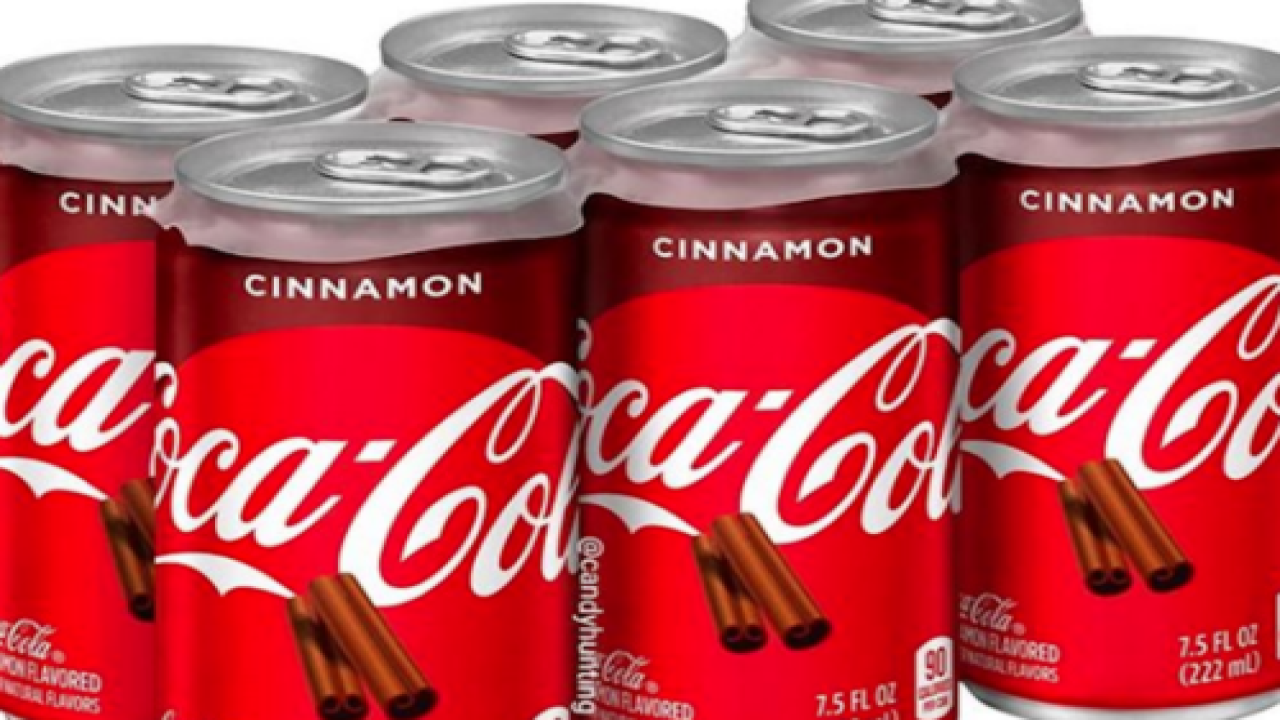 Deck the halls with … cans of cola! Summer may not be over quite yet, but that doesn’t mean you can’t get excited for the holiday season — especially since Coca-Cola has confirmed that it’s rolling out festive flavors to give you an extra jolt of jolly come Christmastime.

Expect to see Cinnamon Coke and Winter Spiced Cranberry Sprite on store shelves as soon as Sept. 30, a Coca-Cola spokesperson confirmed to “Today.” The drinks will be limited-edition and only available until Dec. 31 or while supplies last.

Rumors started when the @candyhunting Instagram account posted about the news along with a photo of the Cinnamon Coke:

Confirmed! Cinnamon Coca-Cola will be out this winter in the US! This flavor debuted as a Zero Coke variant in the UK last winter. And a fun fact: Cola is a mix between citrus and brown spice flavors. Coca-Cola leans more toward the spice side and Pepsi leans more toward citrus. Adding extra cinnamon flavor will kick up that brown spice an extra notch.

Coca-Cola confirmed the good news soon after. No other details have been officially released yet, but since cinnamon-flavored Coke has already been circulating in a zero-sugar variety in the U.K., we were able to gather a few details about the flavors.

A press release announcing the U.K. product indicated that the Cinnamon Coke flavor was “festive,” but customers who have tried it have turned to social media to describe what it actually tastes like.

Instagram user @thruangelaslens said the cinnamon taste was “subtle” and “not overpowering or fiery but still comes through with every sip.”

This cinnamon @cokezero is actually only available in the U.K., but since I’m in the “family and friends” category thanks to the fabulous Coke graphic designer @sarahkim_21, I got a taste of this relatively new drink plus more of my favorite Vanilla Coke Zero ð I’m not usually into cinnamon-flavored drinks, but this Coke is surprisingly pleasant with very subtle cinnamon flavor that’s not overpowering or fiery but still comes through with every sip. Maybe @cocacola should consider bringing this to the U.S. market? ð¤ It could be a hit ð Also, glad the Super Bowl is long over so an Atlanta brand can get a proper skyline for background ð . . . . . . . . . . #coke #cokezero #cinnamoncoke #cinnamon #cocacola #cola #onlyintheuk #tastetest #soda #zerosugar #drinkup #vanillacoke #atllife #clouds #iphoneography #citylife #atlanta #midtown #urban #urbanliving #quicksnap #cityscape #atl #atlskyline #highrise #skyline #familiar #architecture #city #blueskies

Others simply declared their love for the drink.

Meanwhile, the other seasonal flavor, Winter Spiced Cranberry Sprite, may be slightly different from Cranberry Sprite, which has been in production since 2013, according to a press release . The drink has amassed a fan following in that time.

When asked, “How does the Sprite Cranberry taste?” Twitter user @amoresempretua responded with just one word: “BOMB.”

“ @passport_cutty : How does the sprite cranberry taste ?” BOMB

While these sodas may be good for sipping on their own, they’re also bound to take your holiday cocktail game to the next level. We have a feeling the Winter Spiced Cranberry Sprite will pair nicely with your favorite vodka, while the Cinnamon Coke will be delicious when mixed with a whiskey.

Who’s excited to give these limited-edition flavors a try?