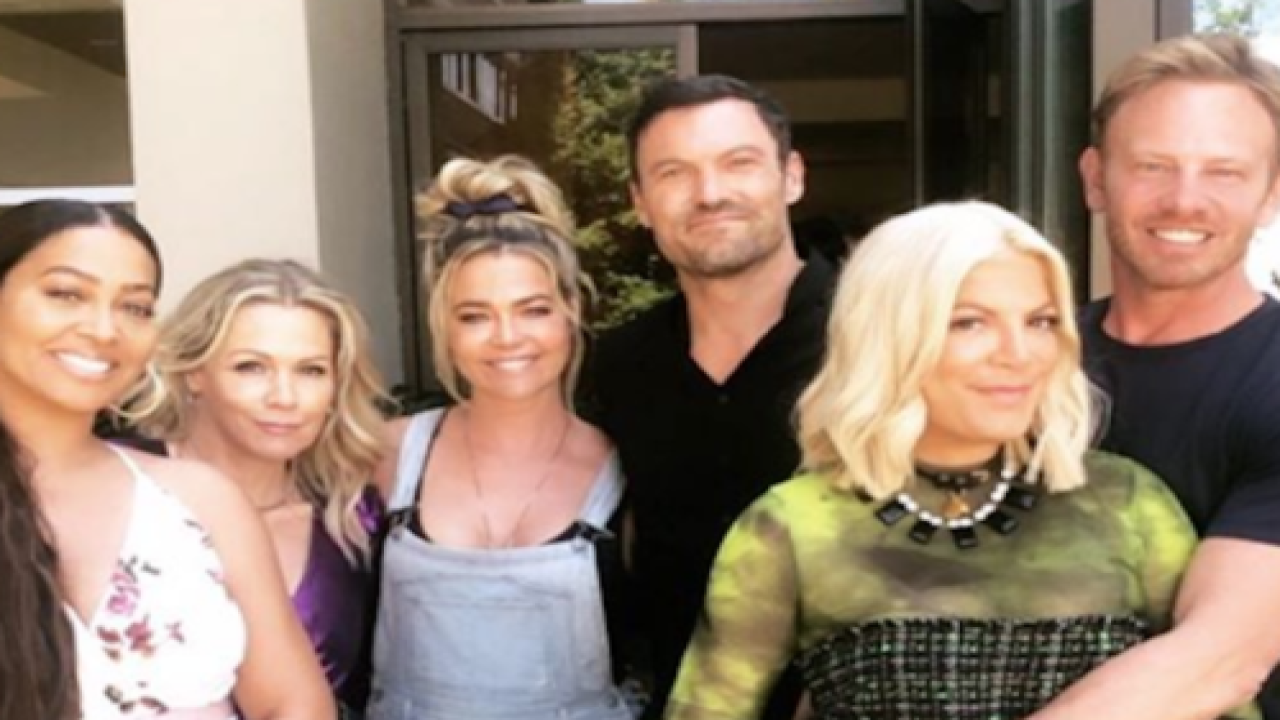 Calling all “Beverly Hills 90210” fans! The time you’ve all been waiting for is about to arrive. The reboot of the hit 1990s and early 2000s TV show, “BH90201,” is set to premiere on Fox on Aug. 7, and the cast is just as excited as you are. They’re gearing up by wrapping up filming the season and posting behind-the-scenes photos of the cast together again that will have you feeling all sorts of nostalgic.

Tori Spelling, who plays Donna Martin, posted an image of the reboot cast sharing a sweet message on Instagram:

“Can’t wait to share with you all the fun we’ve been having being back together. For anyone who’s ever said ‘You can’t go home again’ we are living proof that you can! I’ve had some of the best laughs, hugs, shared memories, great realizations, and feeling of life coming full circle this summer!”

Last week of filming @bh90210 AND 8 more days till our premiere on @foxtv (Wednesday, August 7)! – Can’t wait to share with you all the fun we’ve been having being back together. For anyone who’s ever said “You can’t go home again” we are living proof that you can! I’ve had some of the best laughs, hugs, shared memories, great realizations, and feeling of life coming full circle this summer! I love all of my old family and all of the new family members we’ve welcomed. #ASummerToRemember #LetsDoItAgain #Memories #Love #Family #bh90210

Spelling also hinted at new things to come from the “90210” family. “I love all of my old family and all of the new family members we’ve welcomed,” she wrote.

Here’s a blast from the past, showing what a few members of the original cast looked like during the show’s first run. Garth shared the image on Instagram writing, “I can’t believe this is happening,” referring to the exciting news of the reboot, of course:

It’s been a while! This photo of the castmates posing together in 2006 fills the gap (just a bit!) between the end of the old show and the start of the new one:

As Spelling said, new actors, such as Vanessa Lachey, will join the cast for the reboot. Lachey confirmed the news on Instagram, announcing her character’s status as the wife of character Brandon Walsh, played by Priestley:

Introducing Mrs. Jason Priestley… or am I Mrs. Brandon Walsh?! One month until the premiere of @bh90210!!! August 7th you’ll see what I’m talking about & you WON’T be disappointed! We’re cookin’ up some juicy stuff!!! #DreamJob! â¤ï¸ð«

So, there will be familiar faces and new ones for “90210” fans to look forward to! This is exciting news, especially since the show has gained new fans since it originally aired — including the original cast’s kids. Those new fans will get to watch the reboot alongside the show’s original audience. So, it’s great that there’s something for fans old and new to enjoy!

Priestley’s daughter Ava loves the show her dad starred in — so much so that she attended a school dance done up as none other than Kelly Taylor, according to an Instagram post Priestley’s wife shared:

It’s now come full circle. This is my beautiful daughter @ava.priestley Her father is @jason_priestley from the original 90210 TV ðº series in the 90’s. Tonight, at my daughters school, they held a 90’s theme dance for the middle schoolers. Ava just started watching old DVD’s of 90210 and absolutely â¤ï¸ it. She is totally obsessed and wanted to go as Kelly Taylor tonight. I can’t……worlds are colliding. To help get this look ð I used @solalook the Beverly Hills eyeshadow palette ð¨ but you could also use a simple brown and black matte shadow for the eyes ð(the palette is so cute thou) I also used @toofaced #9021Ohhh for the lips ð  Hello 90’s makeup. A couple of you were asking…the shirt ð is from @forever21 . . . . . #middleschooldance #90theme #beverlyhills90210 #AvaPriestleyAsKellyTaylor #90210 #90sMakeup #fox90210 #foxreboot90210 #schooldance #AvaLoves90210 #90210eyeshadowpalette #toofacedlipstick9021oh #makeupartist #mommyandme #motheranddaughter @jerrodblandino #lovemylittlegirl #solalook #BrandonLovesAvaTheMost #original90210 #kelly90210 @jenniegarth ð

The mom pointed out that everything has come “full circle” and with the show’s reboot right around the corner, it most certainly has!

Who will be tuning in to the reboot’s premiere on Fox on Aug. 7?